It has been hot for so long that we decided to take a day off and head for Rapolano,  famous for its  thermal waters.

We were greeted by a strong sulfurous smell, which we quickly 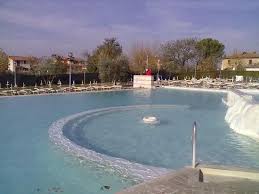 became accustomed to as we immersed ourselves in the varying temperatures of the soothing waters. Mineral deposits cover the submerged surfaces giving a most attractive  effect of carved white stone.

Eventually, we convinced ourselves that we had been in the water long enough and set about finding a comfortable spot for a (discreet) picnic.

Although there
are plenty of  sunbeds located around the pool areas, we prefer to sit under the cool shade of olive trees. And so it was that we spent a lazy afternoon reading and relaxing in the most wonderful of Tuscan settings.

Rapolano Terme is also known for its travertine, a stone deposited in the fresh waters surrounding the area, first discovered in 1597.

It subsequently became one of the most important aspects of the town and has influenced more than just architecture and the landscape. It is a fundamental part of the economy, the social structure, history, language and artistic genres.

Culture also plays a large roll in Rapolano Terme. There is a literary prize, an olive oil festival, a rich theatre program and the Festival di Rapolano each July. An open-air travertine theatre is set up to host multicultural events such as Egyptian concerts, Maghrebian music festivals and song and dance routines for cinema.

By subscribing to our email you will be the first to hear of special offers and discounts.